Mr. Bushnell's vegetable plot has been placed to the side of his house. Whether or not this existed for real is unknown but in 1916 food was becoming scarce (there is a war on you know!) and it seems likely that most households were growing vegetables.

The construction uses various scatter and flock materials but wherever possible I try to use real flora. There is nothing better to represent flora on the model railway than the real thing.

First up are rows of cauliflowers. These are in fact the flower buds of a blackthorn tree, dried in the airing cupboard for two days before gluing directly on the model without further treatment. The buds have outer green petals and a tightly enclosed apple green to white core. Caught early in the season just as flowers are opening the buds vary in size and are suitable for 2mm and 4mm scale. 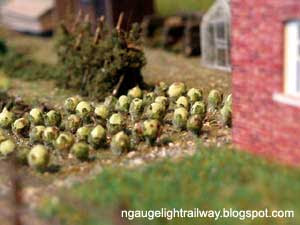 First time I have tried this so don't know how they will stand the test of time. At the moment they are like hard little bullets. Maybe a coat of matt varnish would seal them from degradation due to moisture ingress and if the colour fades they could be painted over. I have been a bit over zealous with the planting. Two or three rows would be ideal.

Next are rows of potatoes. The earth is heaped up along each row but does not show with these plants fully grown. The core of each plant is a flower from yarrow, collected in autumn when the plant has died to brown. It is trimmed to 4mm tall and glued to the row. This approach gives bulk and height to the plant. The greenery is provided by Morrisons dried flat leaf parsley. It has a good green colour and shape to represent leaves. I also plan to use it on the tree line at the back of the model railway. The yarrow flowers are covered in neat PVA glue and the parsley laid on and sealed over with diluted PVA glue. 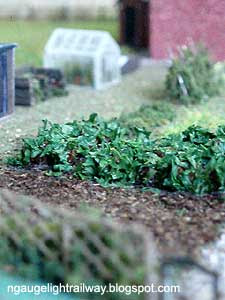 Once again, don't know how the parsley will age but since it was pre-dried by the supplier and still has a strong green colour it may last for ages and could be painted if it fades later.

Finally, the chicken coop and chickens. We know for sure that Mr. Bushnell kept chickens as there is a photo in our reference book. The coop is based on that in another photo from the early 1900s, scanned and enhanced on the computer for printing and forming. The chicken wire for the run is a fine plastic mesh. The chickens are made from cooked Fimo clay. A very small piece is formed into a fat U shape and thin wire pushed into the body for fixing to the model. 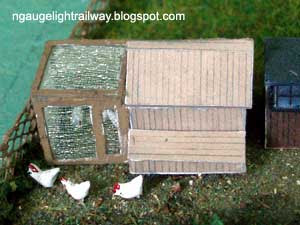 Email ThisBlogThis!Share to TwitterShare to FacebookShare to Pinterest
Labels: landscaping