Cliddesden made its public debut on 12th October 13 at the Farnham MRC expo. in Aldershot. This was not only Cliddesden's first outing but was also the first time the operators had exhibited.

Having unloaded the kit some electrical connectivity issues on the layout were manifest due to damage in transit but, like good boy scouts we were prepared with an array of tools and it was quickly corrected. Thereafter everything went smoothly and the 'hand of God' was not evident as much as we feared, except for uncoupling wagons on the layout - how do you elegantly separate Rapido couplers?

Farnham MRC gave us a great pitch and were well organised in providing services and hospitality. We would like to especially thank Noel and Kevin of Farnham MRC for their welcome and others who's names escape us.

The layout was well received by the public who seemed drawn to it by the fine details and/or overall ambiance of the scene, which is actually quite easy to create when a layout is of a real place. Cliddesden did not make it into the top four layouts voted by the public, but it was 'mentioned in dispatches' at the after show party.


How the layout was received by the public was a test as to whether or not we would exhibit again and start our long talked about Thornycroft project (the factory being a few miles up the line). We received two invitations to exhibit at other shows and are pleased to say we would be interested in attending shows within our local area. With regards to Thornycroft - watch this space.

Finally, one visitor who viewed all the layouts voiced his praise of Cliddesden with one word - "unique". 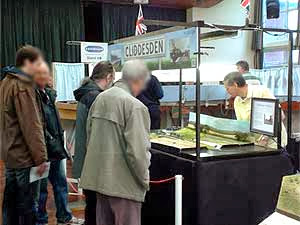 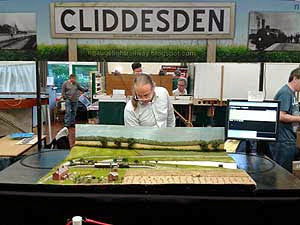