If you visited this Blog having read our article in Railway Modeller and want to know more then the best way to navigate this Blog is to select a topic of interest from the word cloud (titled Labels) shown in the left hand column.

This Blog covers the modelling of Cliddesden Station and Thornycroft Sidings in N gauge.

Yet another outing for Thornycroft Sidings 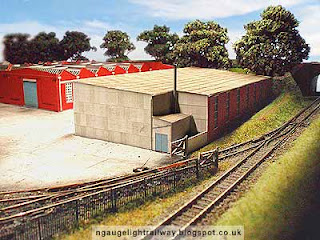 Thanks again to the Thornycroft Society for inviting us along on the 12th May 2019, to the annual transport festival, this time being organised by the Rotary Club of Basingstoke & Deane. The weather managed to hold out, to make it an enjoyable busy day.We had many passing visitors. With the usual ex thornycroft workers, and local residents always keen to take an interest in the layout, along with the young wanting to see the trains go round and round.

This year I managed to get my face (and the layout) in the Basingstoke Observer newspaper (at the time dad (aka David) was looking around the vehicles and stalls):
Ed
at 21:26 No comments:

Another Outing for our Thornycroft Sidings Layout

Will Hay Day 5 - The Return to Buggleskelly 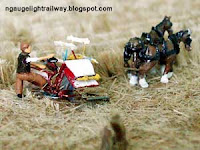 One thing that puzzled me about wheat field harvesting with horse and reaper in the early 1900s was how the sides of the field were worked? Was a strip left unplanted or did the horses just walk through the wheat? With no answer to hand I simply planted the wheat to the fence line. No one who has read this blog or seen the layout at exhibition queried it. 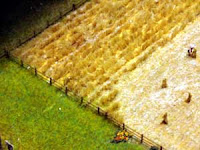 Unexpectedly and recently, the answer came to me from reading Thomas Hardy's Tess of the D'Urbervilles. In support of the story line Hardy described in great detail the landscape and working practice.

Whilst being a work of fiction I believe what he described in this respect is true. He described a wheat field that had been 'opened', meaning the wheat at the fence line was hand-cut a few feet wide for the horses to walk unhindered by the wheat (at the time the wheat variety would have been between 3 and 5 feet high). 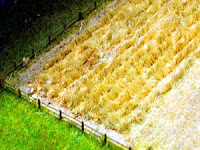 Armed with a pair of sharp scissors, I cut the lanes and coloured the cleared ground appropriately with acrylic paints.

Not your usual model railway show...

On the 30th June we were invited by the Brookvale Community Association, to attend their Thornycroft day. A small event remembering and highlighting the importance the Thornycroft Motor Works was in the history of Basingstoke. Brookvale was the area where most of the factory workers lived, and the factory once stood. The association was also raising money to build and place a replica clock on the village hall, that once stood on top of the Thornycroft factory, something they have been trying to do for a few years.

The event had many interesting Thornycroft memorabilia on display including; unseen photos, work magazines, and registers. Also 3 vintage Thornycroft vehicles were on display parked out the front for all to see. There were also some hands on "engineering"tasks using Meccano and clock-work train emphasizing the ethos of the factory, and an interactive show put on in the afternoon by the Thornycroft Girls.

We were there with our model railway, which accurately represents 1/3rd of the Thornycroft factory, to give visitors an idea of what the factory would have been like in the 1930's, which once stood on the now supermarket site. Obviously this was not your normal model railway show, but an opportunity to learn more about the company and factory and bring a bit of history to life!
It was a beautiful sunny day, and with a few other events on around the town as part of the Basingstoke Summer Festival, the attendance here was lower than we were hoping. However it did give the opportunity to reminisce with some of the ex-workers, who brought the model to life by telling us some stories about the factory, such as a fire that broke out onsite. Apprentice's sun-bathing on the roof of the factory and taking vehicles on test drives.

The local newspaper sent along a photographer to the event, and the following week there we were in the local press...

Thanks to the Brookvale Community Association and all those that attended, with many visitors providing nice comments about our layout.