In the photo below this building sits between two railway sidings and next to the large building with three ridge roofs on the left. (Click image for a large view). 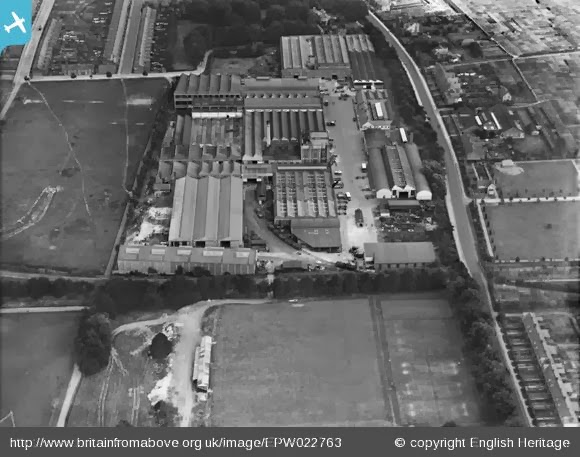 The Thornycrofts Motor Works, Basingstoke, 1928 - Britain from Above

Unknown. Probably related to the movement of materials between railway wagons and the yard. Adjoining the shed is what looks like a dump or spoil heap enclosed by two walls. In later years, after the shed was demolished, industrial waste is known to have been stored in this area.

Corrugated iron throughout. Unlike other corrugated buildings on site this one was not white but black, or similar dark colour. The fencing for the dump was upright timber beams or planks, could be sleepers but may have been from the stock of timber used in vehicle manufacture.

Here is the model on our full size plan. (Click image for a larger view). 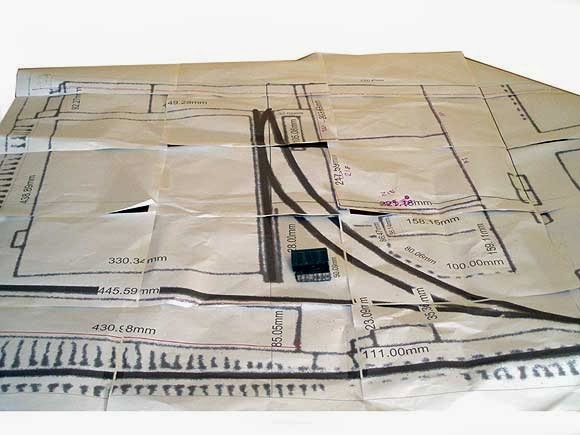 One of the delights of modelling the factory buildings is the variety of styles and sizes. You may have detected that I am alternating construction between large and small buildings. The large ones take some considerable time to design and make from scratch whereas this shed was completed within a couple of hours, which helps with motivation. 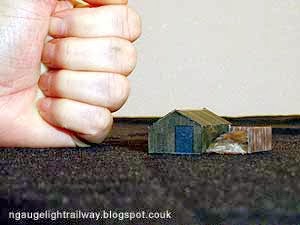 Designed in a graphic application and printed on paper that is stuck to card. I have given the building doors at each end and a window at the other end. Somewhat fictitious as no images are available of the prototype in this respect. No relief is given as they are flush with the iron.

The walls of the dump are designed using a photograph of a vertical wall of sleepers.

I wanted to model the dump to look like an industrial spoil heap and happened to have to hand a moulded rubberised dump bought for early railway layouts. Not sure what the scale is but the footprint is larger than needed for this model. I did not want to cut it to size so I used FIMO* clay to create a mould from part of it. This was used to mould the dump from more FIMO.

*FIMO is heated in a domestic oven to harden it. 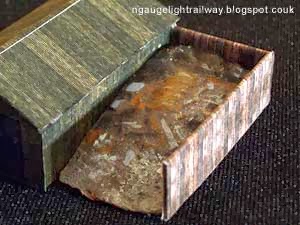 Next I studied colour photographs of industrial dumps and painted the various bits and bobs in the model with similar colours.

Quite pleased with the result.

The next building to make will be the largest on site.

In the photo below this building, with its four entrances, is on the left of the factory directly next to the white ended building. 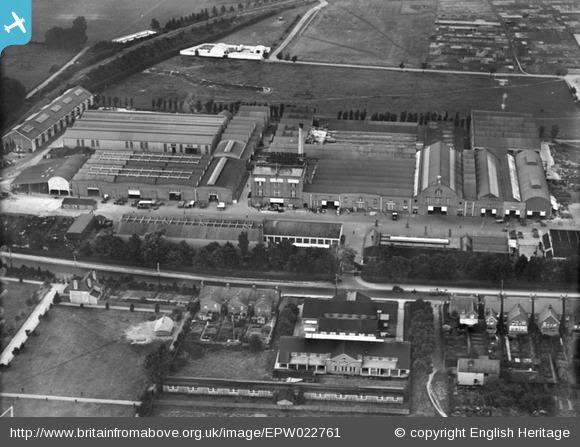 The Thornycroft Motor Works, Basingstoke, 1928 - Britain from Above

The building contained three departments. The left most bay was a stock vehicle garage. The next bay was the paint shop and the two bays on the right a wood working shop where vehicle bodies were manufactured.

Originally a single corrugated iron building with curved roof and cupola stood where the fourth bay is and  was used for wheel and body manufacture. The land between this and the timber drying shed (white ended building) was a vacant plot.

By 1914 the two bay building on the left was in place with a white frontage but set back from the line of the timber drying shed. By 1919 the third bay was added and the entire building frontage brought forward in line with the timber drying shed. The original corrugated building was incorporated in this re-structuring and extended to the east with its extension given a flat roof. After the 1940s the entire roof of this bay was replaced by a corrugated iron pitch roof with corrugated skylights.

The building survived until the end.

The saw-tooth roof had skylights fitted on the short side. Rectangular shingles to the other. A matrix of supporting beams linked the roofs. The fourth bay roof was curved corrugated iron with a cupola running almost the full length in the 1920s/30s, the period of our model..

The next photo shows the model in situ on our full sized layout plan in a similar orientation to the real building shown above. 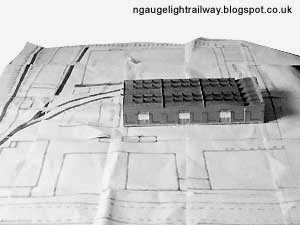 The design and general construction is the same as the Wood Store. The building is raised on a 4mm plinth that will disappear into the ground on the layout.

The east end is incomplete because we hit the end of the available space on our baseboard. In fact the building butts onto the back scene in a 'low relief' fashion. The split line fell inconveniently down the fourth bay double doors and its window above. To avoid this I moved the doors a little further along than the prototype so they move off the model and into the back scene. That's OK until I discovered that this places the cupola half on model and half in the back scene! It would have been better to have a truncated door of only a few centimetres so that the full cupola could be modelled. As it is we have a truncated cupola of 19.5 centimetres! 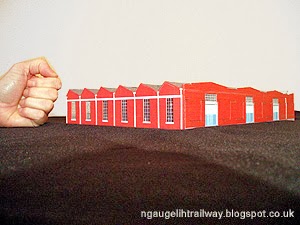 Not the largest building on our plan but possibly the most complex having much architectural detail that took a long time to design and make (at least 80 hours).

Each garage door is twice the width of what you see and slides between guides fitted at the rear. Opening is achieved simply by pushing with a scalpel blade but closing is more tricky and is achieved by pressing the blade point into the door to pull it across - not to be done too often. 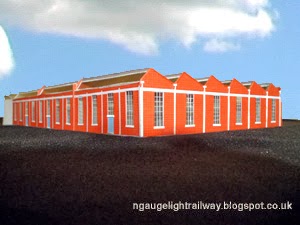 This building has working interior lights (a Livarno 3 strip set from Lidl) so, all windows are transparent. An excellent method of making transparent windows with ultra thin glazing bars (I achieved about one third of a millimeter) was found here. It was quite therapeutic making these.

Drain pipes are fitted because they are quite noticeable on the prototype. 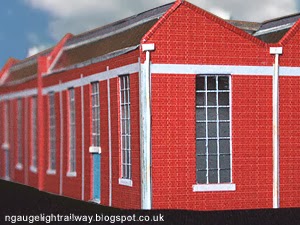 The roof beams include small curved supports. These were made using a hole punch for the inner curve and then cutting the outer curve and the straight upright with scissors. 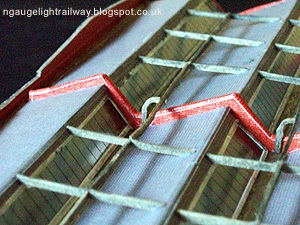 The final photo below shows an early evening  moonlit scene in winter with the building interior lights ablaze indicating the working day is not yet over! 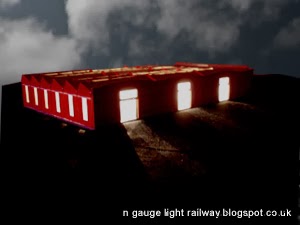 The LED strip is a little too bright so, we'll obtain a dimmer in due course to control the brightness.

In the photo below the Store is the building bottom centre of the factory site. (You'll need to click the image for a larger view to see it).

The Thornycrofts Motor Works, Basingstoke, 1928 - Britain from Above

All that is known is that it was a store. Possibly for long poles/beams of wood or metal (See Construction below).

This was not one of the inaugural buildings on the site. It may have been built around the first world war and was definitely in place by 1928. It was still present in the 1950s but did not last until the end, probably demolished after vehicle manufacture ceased in 1969.

Corrugated iron painted white with the main floor raised above ground level. It is not clear from photographs whether the two large 'windows' were in fact pigeon holes for storing materials. One photo does seem to show materials protruding from a couple of the 'panes' and if they were pigeon holes then a similar arrangement for the lean-to is logical. There was a similar arrangement of large 'windows' on the other side of the building that faces the railway line. These may not be pigeon holes as they open onto the public railway!

A small extension existed on the North side of the building.

The next photo shows the model in situ on our full sized layout plan in a similar orientation to the real building shown above. 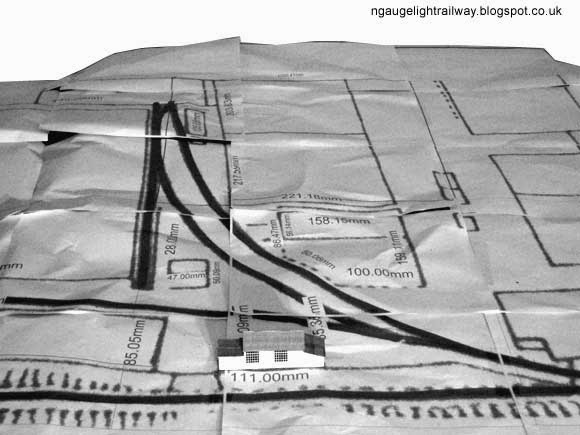 The design and general construction is the same as the Wood Store. 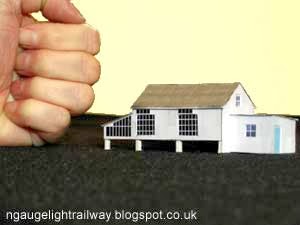 Due to the uncertainty of windows or pigeon holes these fitments are modelled opaque to represent either. No entrance door shows up in photos so an assumed door has been placed in the extension. 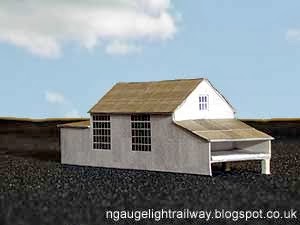