I won an auction for 3 different wagons in disrepair including a Graham Farish SR cattle wagon, which is the item I was really after as I wanted to convert it to LSWR. I feel happier converting a wagon that has a little bit of damage than bodging up a brand new one. The only fault with the cattle truck was the roof, which had been badly painted and had an unsightly locating plinth that was visible through the railings.

The other two wagons had more damage. Parts from both had to be used to make a good wagon that I can sell at auction. Hopefully, this tactic will result in a return on my expenditure that means the cattle wagon cost nothing!

The changes needed for the cattle wagon were to put the roof right, change the SR legend to LSWR and apply some lime wash. Lime wash was a disinfectant used until about 1924 when it was made illegal as it caused health problems for the animals - I read that it rotted hooves.

The Graham Farish cattle wagon is based on a GWR diagram, I believe, but it looks close enough to pictures of LSWR types.

First job was the roof. The offending plinth was cut away and the black paint finish removed with emery paper. Unfortunately it cut right through the original white finish to the grey plastic. Not too troublesome as I intended to 'dirty' the white anyway.

The SR lettering was scratched away and LSWR letters applied taken from BR words on a 'pressfix' sheet, except no 'w's left so that was applied with paint and an ink mapping pen.

Weathering of the roof and application of lime wash was the last job. I have been impressed with weathering techniques used by other modellers, especially the use of powders, and wanted to have a go. I could spray paint instead but I felt the powder would be more controllable on such a small model.

I found a good review of MIG Productions powders as being well suited to 'n' gauge because they are very fine. However, I did not need a large quantity and they are relatively expensive. Then I found a video at YouTube that demonstrated the same effect could be obtained using cheap pastel crayons scraped with a knife to make the powder that is then dry brushed onto the model and guess what - we already had a white pastel crayon in the house from previous art interests.

Powders need a base to adhere to so I sprayed the roof with artist fixer spray (matt varnish will also do) and brushed on some white pastel scrapings. This was then sprayed again to fix the powder and all repeated again to whiten the grey roof further. It is in fact much more grey than shows in the photo below, giving the impression of a very dirty white roof.
﻿ 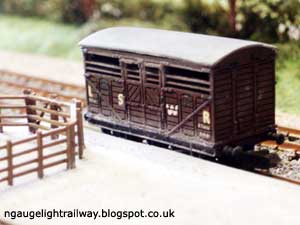 I then proceeded to apply the powder to the inside of the body, outside of the top railings and along the bottom of the sides and chassis. The end result is quite pleasing albeit not as white as shown in prototype photos but I expect the whitening effect varied and I did not want the finish to be too glaring.

Email ThisBlogThis!Share to TwitterShare to FacebookShare to Pinterest
Labels: wagons 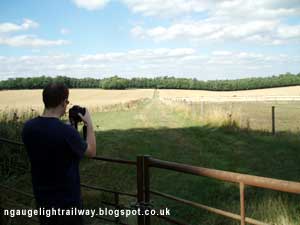 In preparation for making a photographic back scene we went out to the actual site to take photos of the distant landscape. Cliddesden station, or rather the flora that it has returned to, is behind the photographer, who is standing at the field entrance on Station Road - both of which appear on our model layout.

If the back scene works then the tree line with sky above will be a good scenic break for the model.

I joked before we went that being August the field is probably wheat with a 21st century combine working there. Sure enough the field was wheat, albeit much shorter than the variety grown in 1916. Fortunately, no combine there to spoil the view.

We also had to check there were no jet vapour trails across the sky.