A little update... We have started to paint the track a rusty colour, to give it a more weathered, natural look. 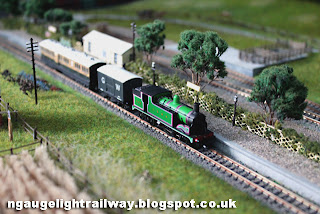 It's a little tricky, as we should really have done it before we laid the track... but we like a challenge.

Email ThisBlogThis!Share to TwitterShare to FacebookShare to Pinterest
Labels: track

The last piece of Cliddesden landscaping to do is the rear gardens of the four terraced station cottages. However, progress is delayed because we don't know the layout of them between 1901 and 1936!

Reading large scale maps of the area suggests the rear gardens were open plan, i.e. no fences or demarcation between but, is this really true? The only fence shown is between the cottages and station master's house.

If you can help us with information about the rear garden layouts of the four cottages between 1901 and 1936 please email admin@amodelrailway.co.uk or comment on this post below.

Herriard and Bentworth & Lasham station cottage gardens were probably similar so if you know about those that will do for us.

Email ThisBlogThis!Share to TwitterShare to FacebookShare to Pinterest
Labels: cliddesden

"..in Mr. Vince's time, when the stationmaster was the general factotum, prepared to do anything, he once in 1915 had to wheel a coffin containing the body of a boy who had died in Basingstoke to the village, followed by the sorrowing father."

There is some conflict on dates and position because Martin Dean's book of the same name states he was Office Porter from 07/1916 to 03/1917.

No matter because it fits our period and the scene is begging to be modelled. So, here is Alfred Vince pushing the station barrow with the coffin and the grieving father in tow along station road . Probably on their way to the church in the village. 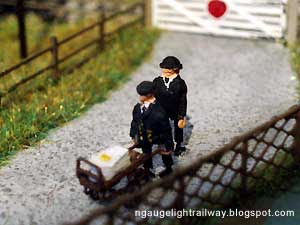 I have given the father a black tie and bowler hat - common hat at the time, and the porter is in L&SWR uniform. The coffin is child size and in white with a brass plate. The photo was taken from the bedroom window of number 4 station cottages. 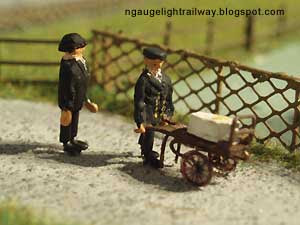 In this view we can see the porters brass buttons and a clearer view of the L&SWR luggage barrow. the barrow was made from card and wire except for the wheels. Several failed attempts using wire to make a 10 spoked wheel that is only 4mm diameter. Final solution was to scale a photo of an actual wheel and print out on transparent film. Two stuck back to back for a little more width. Quite pleased with the result and quick to make when you know how.

Just a Bit of Fun

Having suggested the idea of modelling Thornycroft and its railway yard off the B&ALR I then found this wondeful aerial photo from the 1920s on the new 'Britain From Above' resource. The shot has been taken from the perfect angle and covers the area of landscape proposed for the model. It will be a key reference should we proceed. In fact, finding something as good as this is tempting fate that it must be done.

Below is an aerial photo of Cliddesden you will not find on 'Britain From Above'. 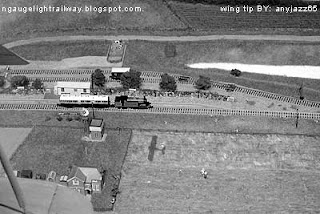 Email ThisBlogThis!Share to TwitterShare to FacebookShare to Pinterest
Labels: thornycroft

Far and a Field

Laying the turf is almost complete. The bulk of applying the static grass is almost over, just the station workers terraced gardens to consider next.
Here's a picture showing the fields at the back of the goods yard, with the turnip field on the right and goods yard bottom right. The field has been put out to pasture, and is looking a little rough from the recent summer dry spell. We have had to modify the profile of the back fields due to the back siding/ track, the field has had to be made taller so that from viewing height you can't see the train. A hedgerow and trees also increased the height further, but makes the field smaller than what it actually is/ would have been back in 1916. Google street map shows the view today (see below). A handmade post and wire fence lines the whole road and turnip field boundary. Each post is made from cut-up matchsticks, and each one painstakingly drilled by hand with 3 holes, inserted and glued into the board, and then thin wire threaded through.

Email ThisBlogThis!Share to TwitterShare to FacebookShare to Pinterest
Labels: landscaping 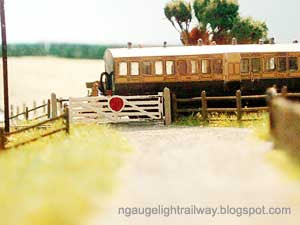 This gate is based on that first installed by the L&SWR at Cliddesden. (Later, in Southern Railway days, the gate was changed to the SR style, characterised by two crossing braces whereas the L&SWR used two diagonals).

We could not find a set of L&SWR gates from the trade, even if there was one the chances are it would not fit our gap! So, it is scratch built from balsa wood. I set out with the plan to fit six bars as the prototype, but I was so focused on getting the 4 foot height correct that I forgot the sixth bar and ended up with five. After the job was done I discovered I was working to the wrong height anyway! It should be 5 foot not 4 foot. (An extra 2mm at this scale, which would need the sixth bar. Perhaps I'll remake it when I have a few hours spare.) 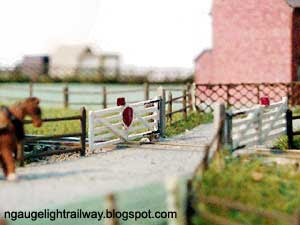 The gate is glued to the concrete coloured post, which is long enough to pass through the baseboard. The ink tube from a ballpoint pen is installed in the baseboard and the gate post inserted into it thus allowing the assembly to swivel open and closed by hand.