The J Class War Department general service lorry recreated by 3D printing it as a kit of parts. A far more accurate representation than that shown made with FIMO clay in the previous posting. 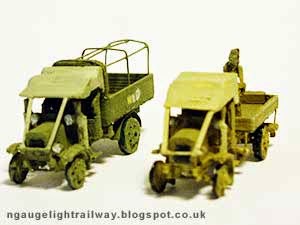 And in situ outside the Thornycroft Museum alongside Van No.1 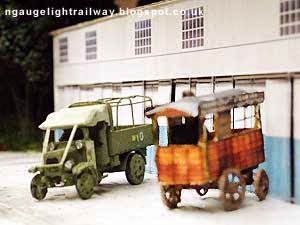 For an in depth study of how the J Class was made please visit my other Blog.

I mentioned in the previous posting that 3D print is more accurate than modelling in FIMO clay. I knew already that our Thornycroft J Class general purpose War Department lorry made in FIMO clay was too tall but I did not appreciate how out of scale it really was until putting both models side by side. 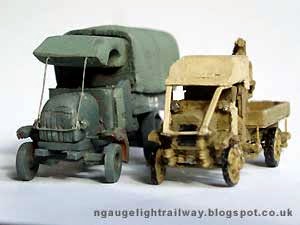 The clay model starts to go wrong above the chassis line. This will not do so, I'll need to remake it in 3D print for our Thornycroft Sidings layout and maybe a total of  five to replace the batch displayed on our Cliddesden Station layout.

I keep mentioning 3D print in these postings (I have made quite a number of different models using it during this project) but not gone into detail about the process. Well, I'm now going to take you through the entire process, warts and all. But, not here. The series will be shown on our sister Blog - amodelrailway.blogspot.co.uk. You may wish to follow there and set up email alerts for new postings.  But don't give up on this Blog, there is much more to come here.

To begin with read about the 3D printer we are using.

Thornycroft manufactured 183 of this J class variant between 1915 and 1916. Each carried a 13 pound anti-aircraft gun. This one (below) had an interesting history, which you can read at The Great War forum here.

Briefly, it was acquired by Thornycroft in the 1920s for their own factory museum but during WW2 it was placed on the road embankment between the factory Chassis Store and Deep Lane to ward off German fighter planes! There it languished, rotting away until given away for free to an enthusiast in the 1960s. You can see the state it was in at this time on The Great War forum here.

This movie shows the gun in action. It actually shows two different gun emplacements. Look for the one mounted on the lorry, which is the Thornycroft. Note the number of Tommys operating it and their deployment of the lorry stabilisers.

A super detailed 1:32 kit is available from Tommys War. 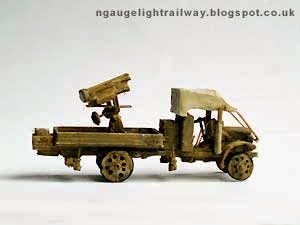 Regular Blog followers will know that we previously made a J class general purpose War Department lorry out of FIMO clay.

Now we have a 3D printer the J Class Anti-Aircraft Lorry was designed in 3D CAD and 3D printed in plastic as a kit of parts. This facilitates a much greater level of accuracy and detail than using clay. The model is our most detailed  to date, much of which is not seen in the photo. Did you notice that I fitted the gun barrel upside down? It has since been corrected. I'm not showing a larger photo because there are blemishes in the parts, due to the technology of this process, that are barely noticeable at normal viewing distances in this scale.

The trouble with 3D printing is that the plastic is extruded like string and laid down in rows, which are visible. It can also get a bit blobby for very small parts. In fact the wheels did print as blobs. The machine could not cope with the 8 x half millimetre round vents in the wheels! Much filing and drilling was required to get some resemblance of the cast wheels with solid tyres.

Below is the lorry alongside the chassis store in 1939. 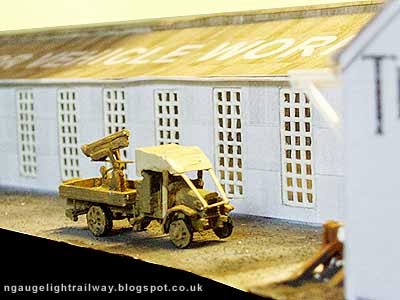