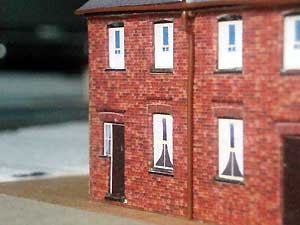 Picture right is Number 3 and 4 station road, Cliddesden in about 1916, modelled in 'n' gauge. Created using my technique of ink jet printed graphics and board. The design and fabrication turned out to be quite involved compared to the simple station building created earlier. Possibly because there are four cottages but also some intricate details here particularly brick embellishments and roof buttresses.

Apart from the pleasure of creating a nice model from scratch it is the historical research that makes it worthwhile for me. 'The book' only shows a glimpse of No.4 at Cliddesden - the rear corner. But since all three stations on the line had the same style of cottages a look at Heriard and Bentworth & Lasham in 'The book' gave me the frontal views needed. 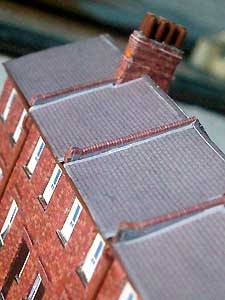 A flemish bond brick graphic was used even though close inspection of the actual brickwork seems to show a more random use of half bricks.

Google Street View has been a godsend in helping me to design the model building. Using it at Cliddesden revealed a close up, full frontal view or the cottages and this was used to scale the building using an assumed 6' 6" for the front door as a guide. Intricate details like the window lintels, roof buttresses and chimneys were easily noted and incorporated into the model.

The building rear was more problematical. There were no significant views in 'The Book'. But, Google Street View captured the rear at Bentworth & Lasham. Interestingly, the ground floor doors and windows have mostly been ripped out and replaced with modern fitments in completely different positions, presumably when the interiors were remodelled for modern living. This almost obliterated the original arrangement. Tale tale signs however, exist in the brickwork where the original lintels still show. This helped to locate the rear arrangement of ground floor doors and windows for the model, the locations of which differ from the front. Even so, I'm not 100% sure I have got it right and I have not found references for the original paint scheme, which I have assumed to be LSWR cream and chocolate. 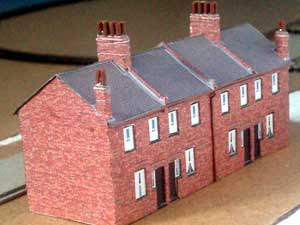 It has been fascinating to see how the cottages have been remodelled over the years. Not only doors and windows but porches and extensions have been tacked on since the cottages were first built. I have had to mentally remove these to identify original traces of the bulding design. I have become a building detective!

Recently, I have been commenting about creating brick papers from graphics and ink jet printing and someone suggested that the colours fade over time. Well, I'm using Epsom DuraBrite Ultra ink. Epson claim it is water resistant and is colour fast for 200 years if shielded from light. Whilst, the buildings are not shielded from light they will be kept out of direct sunlight and may be stored in a box when not in use. I have also given the building a spray of fixative for extra protection. I'll let you know in 200 years how they fair.